Aromatic hydrocarbons contamination is widely prevalent in various parts of the world due to anthropogenic activities and leads to anaerobic conditions. As a result, most of its biodegradation is due to anaerobic microorganisms, and most specifically by anaerobic bacteria capable of using sulfates as final electron acceptor to degrade these compounds. Although there are reports on consortia of microorganisms that are involved in the anaerobic biodegradation of monoaromatic hydrocarbons (MAH) and polyaromatic hydrocarbons (PAH), only few reports are available using pure cultures. This paper describes an anaerobic, gram positive and spore forming bacterial strain (C1Fd), which was isolated and purified from aromatic compounds degrading consortium developed using bovine rumen fluid as inoculum. C1Fd was able to use MAH and PAH under anaerobic conditions and removed up 9.4 mM of MAH and 9.2 mM of PAH in less than 72 h. The strain was identified as Bacillus sp. and is phylogenetically related to the hydrocarbon degrading bacteria, Desulfotomaculum sp., isolated from a wastewater treatment plant.

Aromatic compounds are one of the major organic compounds that pollute soil, water and air and this is mainly attributed to oil and diesel spills (Becerril et al., 2008; Morlett et al., 2008a). Monoaromatic hydrocarbons (MAH) and polyaromatic hydrocarbons (PAH) are persistent compounds and remain in the ecosystem for a long time (EFSA, 2008), resulting in damage to the quality of ecosystem, agricultural crops, fishes, crustaceans and food (Agudo, 2010; Rubio et al., 2006). In addition, PAH can be formed during certain food processes as drying, cooking, smoking, grilling and frying (Ferrares et al., 2008; Martorell, et al., 2010; Alomirah et al., 2011). The presence of aromatic compounds in the environment and foods causes adverse effects on the health of humans and animals (Agudo, 2010; Rubio et al., 2006; Alomirah et al., 2011). Moreover MAH and PAH have been reported to be cytotoxic and genotoxic for humans (EFSA, 2008). An effective and economical solution to this problem is to use biotechnological tools for biodegradation of these compounds. Although biodegradation can be mediated under aerobic and anaerobic conditions or both, higher presence of sulfates in sediments and soils contaminated with PAH suggest the possibility of sulfate being the preferred terminal electron acceptor by anaerobic microorganisms (Lu et al., 2011). Previously anaerobic biodegradation of benzene, toluene, ethylbenzene, naphthalene, 2-methyl naphthalene, fluorene and phenanthrene, mediated by bacterial consortia under sulfate-reducing conditions have been documented (Musat and Widdel, 2008; Dou et al., 2009; Musat et al., 2009; Selesi et al., 2010; Chen et al., 2011; Mathava et al., 2011; Yan et al., 2012; Sun et al., 2014). Different sulfate reducing bacteria (SRB) have reported for the degradation of various hydrocarbons, such as Desulfosporosinus meridiei (Robertson et al., 2001), Desulfovibrio carbonoliphilus (Allen et al., 2008), Desulfotomaculum sp., Desulfomicrobium sp., Desulfobacter sp. and Desulfobulbus sp. (Guan et al., 2012). While most have been isolated from oil contaminated sites, interestingly Desulfotomaculum ruminis, was isolated from rumen of sheep (Coleman, 1960). In this regard, Spring et al., (2012) opined that this bacterium developed in the tract of ruminants because consumption of food contaminated with aromatic compounds. Studies on anaerobic bacteria capable of metabolizing PAH and MAH, will improve current strategies employed for bioremediation of MAH and PAH contaminated sites. The aim of this paper was to study the potential of a pure culture anaerobic bacterial strain isolated from an anaerobic consortia, developed from bovine rumen fluid to metabolize MAH and PAH under anaerobic and sulfate reducing conditions.

Collection and isolation of SRB

Anaerobic bacterial strain, C1Fd, was isolated from a consortium developed of bovine rumen that metabolized aromatic compounds such as phenol, catechol, 4-amino benzene, and p-phenylenediamine, under sulfate reducing conditions (Morlett et al., 2008b).

The colony isolated from consortium, was purified in solid medium by successive spread on sterile agar plates under anaerobic conditions, then this colony was transferred to reactors (100 ml) containing 50 ml of culture medium, under sterile conditions, 4-amino benzene was added and anaerobic (atmosphere of N2) sulfate reducing conditions. The purified bacterial strain was inoculated at 10% v/v, with cell concentration of 1 x 107/ml. The strain was maintained in mineral culture medium, with MAH and PAH as the sole source of carbon and energy, under the conditions described above.

Morphological and biochemical characterization of the strain isolate

Molecular identification of the strain

The grown cells were centrifuged at 10625 x g/10 min, and the DNA was extracted from 0.1 g of wet biomass by using the modified CTAB protocol (Wagner et al., 1987). The integrity and concentration of DNA was evaluated, by agarose gel electrophoresis at 1% and was quantified based on the A260 and A280 nm using the program DNA quantification Gen5 version 1.11 (EPOCH Microplate Spectrophotometer, BioTek® Instruments).

Growth curve of the strain

The growth of the bacterial strain C1Fd was determined in batch reactors (100 ml) containing 45 ml of mineral medium with glucose, as carbon source, under anaerobic, sulfate reduction conditions at 37°C. The reactors were inoculated with 10% (v/v) of strain at concentration of 1 x 107 cells/ml. Then, small aliquots were taken of the reactors and optical density (OD) readings at 600 nm were measured using a microplate in the EPOCH Microplate Spectrophotometer (BioTek® Instruments).

Anaerobic degradation of MAH and PAH

While benzene and toluene were tested as model compounds of MAH, naphthalene and phenanthrene were used as PAH model compounds in this study. Degradation kinetics of MAH and PAH by C1Fd strain were determined according to the conditions established; mineral medium as mentioned previously with 10 mM of benzene, toluene, naphthalene and phenanthrene as carbon source, SO4-2 as electron acceptor at 2.5 mM, pH 7 and at 37±1°C. Mineral culture medium was prepared under anaerobic conditions and in N2 atmosphere and was sterilized in an autoclave at 121°C/15 min (Morlett et al., 2008b) and subsequently the desired aromatic compound was added before inoculation (10% v/v at a concentration at 1 x 107 cells/ml). Batch reactors with aromatic compounds, but without addition of SO42- were used as negative control, while reactors with glucose and SO42- were used as positive control (Morlett et al., 2008a). The kinetics of the biodegradation of each of the test aromatic compounds of this study was determined periodically, viz, 0, 24, 48 and 72 h.

Concentration of MAH and PAH during the degradation kinetics, was determined by a gas chromatograph (GC) fitted with Flame Ionization Detector (Varian Start 3600) and a capillary column CP Wax 52CB (N. CP8745) of 30 m x 0.25 mm x 0.15 µm. The column temperature was programed from 50 to 150°C, at the rate of 1°C/min, injector and detector temperature was 250 and 300°C, respectively. Helium was used as carrier gas (30 ml/min).

Morphological and biochemical characterization of the strain

C1Fd strain was isolated from a rumen fluid derived bacterial consortium degrading different aromatic compounds. Macroscopic nature of the colony and microscopic characteristics of the isolated bacterial strain is shown in Table I.

Biochemical tests demonstrated that the isolated bacteria strain is capable of growing on various substrates (Table I). Further, it was observed that the C1Fd strain recorded growth at high salt concentrations (6.5% of NaCl), and was in accordance to the previous report that SRB can grow under high salt conditions (Barton and Hamilton, 2007). In addition, the sensitivity of strain to the antibiotics; Clindamycin (0.5 µg/ml), Oxacillin (0.25 µg/ml) and penicillin (0.03 µg/ml) was observed.

For molecular identification of the strain C1Fd, a 400 bp amplicon (Fig. 1) obtained from the extracted DNA (100 ng/ml) under the conditions and by using the primers mentioned earlier. 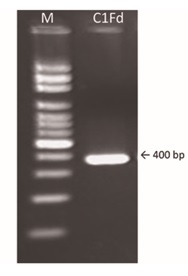 The obtained amplicon was purified, sequenced (GenBank access number is KT633556) and based on 97% similarity of sequence, the strain was determined to be Bacillus genus. A phylogram showing the phylogenetic relationship of Bacillus sp. C1Fd strain, with other sulfate-reducing bacteria was constructed by maximum-likelihood method using Mega5 Program (Fig. 2) and the phylogram was bootstrapped to 1000 times. It can be seen that the isolate of this study was grouped as a separate clade from the compared SRB. This suggested that this isolate is distant from many of the previously described SRB and further tests are necessary for identification at specie level. Besides, it can be observed that C1Fd strain is closely related to Bacillus sp G9C (N. access AY062011), a clone directly related to the genus Desulfotomaculum sp. strain DSM 7440 (N. access Y11579). 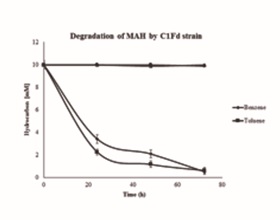 Fig. 2. Phylogenetic relationship of Bacillus sp. C1Fd strain (color bold) with different SRB strains based on the 16S rDNA gene sequences. Analyses were performed using the Maximum-likelihood method, with a bootstrap of 1000 repetitions and the Kimura 2-parameters Model. The accession numbers of SRB are in parentheses.

Laban et al. (2009) reported that there are few Gram positive anaerobic bacteria which can degrade hydrocarbons and that these bacteria are closely related to the Desulfotomaculum genus. Additionally, the isolate due to its sporulation character can survive for longer periods in anoxic environments.

C1Fd strain growth was tested with different MAH for their potential to degrade these compounds. An insignificant lag phase was observed when C1Fd was grown on benzene and toluene (Fig. 3). It was also observed that benzene was resistant to bacterial degradation during the first 20 h and was found degraded later, but at lower rate than toluene until 72 h. These observations are in accordance with previously reports by Caldwell and Suflita (2000) and Coates et al., (2002); since the metabolism of aromatic compounds by sulfate reducing bacteria involve activation of the aromatic ring by methylation, hydroxylation or carboxylation. Thus, toluene having a methyl group is a molecule readily available for biodegradation, unlike the benzene, which first had to be modified before it is bioavailable. C1Fd strain removed 7.7±0.25 mM of toluene in 24 h, while the benzene removal during the same period was 6.57 ± 0.39 mM. However, there was no significant difference in the degradation of these aromatic compounds by C1Fd strain at 72 h (Fig. 3). This implies that the initial lag phase in degradation of benzene is only because of activation and later the strain was able to metabolize both compounds relatively at the same % of degradation  (Foght, 2008; Carmona et al., 2009). Fig. 3. Kinetics of toluene and benzene degradation by CF1d strain.

Degradation kinetics of phenanthrene and naphthalene by C1Fd strain are presented in Fig. 4. A lag period of about 24 h was recorded during the growth of C1Fd strain on both compounds. It must be noted that the C1Fd strain did not show a distinct lag phase when grown on both MAH compounds tested in this study. The strain degraded about 9.2±0.24 and 9.1±0.29 mM for naphthalene and phenanthrene respectively. Fig. 4: Degradation of naphthalene and phenanthrene (PAHs) by CF1d strain.

The kinetics of removal of MAH and PAH by a sulfate reducing bacterial strain is shown in Fig. 5. The near absence of the lag phase during the growth of C1Fd strain was observed in the presence of MAH compounds tested in this study, while it was about 24 h for both tested PAH compounds. The duration of exponential phase was also clearly different for MAH and PAH compounds and this could be attributed to the complex nature of PAH, which requires activation of the molecule to increase its bioavailability for metabolism by C1Fd. However, there was no significant difference of removal was observed between MAH and PAH at 72 h. Fig. 5. Comparison of MAH and PAH removal by C1Fd strain.

Although several authors have reported the degradation of MAH and PAH by different microbial consortia, there are few reports on biodegradation of these compounds by pure culture strains, specifically by sulfate reducing bacteria (Singlenton et al., 2009; Tsai et al., 2009). Nevertheless, the potential of pure culture isolate of this study (C1Fd) to degrade MAH and PAH compounds almost at similar rate at 72 h is clearly demonstrated. These results clearly indicate the the metabolic capacities of Bacillus sp. C1Fd for potential applications in bioremediation of aromatic compounds. Characterization of enzymes from this strain is in progress to enhance its potential for bioremediation of hydrocarbon-contaminated sites.

The authors thank the National Council for Science and Technology (CONACYT) of Mexico for the financial support through project N. 183204. First Author Sandra L. Villarreal Morales also thank CONACYT for awarding her scholarship for obtaining her Master’s degree in Science (Food Science and Technology).