Silver nanoparticles (AgNPs), have been widely used as antibacterial therapy for any microorganisms that are multidrug resistance to antibiotics. Pseudomonas aeruginosa is the most common respiratory pathogen in patients with cystic fibrosis (CF), was collected from Al-Muthanna hospitals. These isolates were drug-resistant against tetracycline, chloramphenicol, erythromycin, streptomycin, azithromycin and trimethoprim, while they were sensitive to imipenem. The conventional PCR was used to screen for many different virulent genes and eventually, the only algD and plcH were detected among 11 Pseudomonas aeruginosa strains over of twenty isolates of P. aeruginosa isolated from patients with cystic fibrosis (CF) disease. The Ag/F Tio2 NPs was used as antibacterial to test the AgNPs activity against the expression of algD and plcH genes that are screened as a common complication of gene virulence in the cystic fibrosis (CF) disease. The results showed a significant effect on algD and plcH genes expression of P. aeruginosa.

Silver nanoparticles are considered antimicrobial,potency agents to treat and inhibit the bacterial infection. It has been utilizedas antibacterial against multidrug resistant bacteria such as P. aeruginosa1. Silver nanoparticles have shown a strong effect on microorganisms such as bacteria, viruses and fungi compared to other minerals2. Silver nanoparticles have been used in the field of health products such as medical devices antimicrobials and applications3. Cystic fibrosis (CF) is the most common respiratory disease that is caused by a primary pathogen Pseudomonas aeruginosa in addition to Staphylococcus aureus4,5,7.

The infection with Cystic fibrosis (CF) is caused by many microorganisms such as pathogenic bacteria and fungal bacteria or fungi causes the inflammation leading to destruction of the lungs and ultimately death. Patients infected with Cystic fibrosis are more susceptible to failure in the respiratory system which is eventually cause the death6. Moreover, the mutation into conductance gene (CFTR), encoding for a membrane protein, involved in electrolytes transport. This type of mutation is leading to the destruction of epithelial cell function as the production of a result of sticky and bronchial secretions6,22,23. Pseudomonas aeruginosa is a major cause of chronic bronchial infection in cystic fibrosis8. In the CF lung, the P. aeruginosa is genetically adapt to cause infection in the lung. This modification is caused that P. aeruginosa is loss of quorum sensing (QS), which is the mechanism for productive the bacterial infection9. The P. aeruginosa is often the nosocomial bacteria as well as is multidrug resistance bacteria against many antibiotics such as fluoroquinolones, aminoglycosides and cephalosporin due to acquisition of different mechanisms for antibiotics resistance10,11.

Pseudomonas aeruginosa colonizes the lung, causing cystic fibrosis and patients infected with this disease have mucosal lesions due to the production of polysaccharide genes18. This also helps bacteria confirm bacterial biofilms that are important in bacterial infection of the lung26. Biofilm is required for both regulators which are AlgB and AlgR controlled by algD, coding for the hydrogenase GDP, which has a major role in the biosynthesis of genes18,26.

The P. aeruginosa causes many diseases upon on the virulence genes factors leading to cause the infection such as cystic fibrosis (CF). The plcH gene activity is phosphatidylcholine (PC) and sphingomyelin. This lipid makes the cellular membrane which is important in bacterial biofilm27. Many studies have been reported that the plcH gene (phospholipase C/sphingomyelinase) becomes expressed during the lung infection of P. aeruginosa28.

The aim of this study was to detect most virulence genes in P. aeruginosa isolated from patients with Cystic fibrosis (CF) and test the antibacterial activity of Ag/F Tio2 nanoparticles against these genes expressions in Pseudomonas aeruginosa.

Samples collection
In this study, 100 clinical samples of sputum were collected from patients with cystic fibrosis infection from AL-Hussein Teaching Hospital in Al Muthanna city between the period from September-2018 to April-2019.

Isolation and identification
The isolation and differentiation of the Pseudomonas aeruginosa strains were confirmed by growing the samples onto CHROMagar™ media and then were confirmed using VITEK- 2 Compact system (Biomerieux/ France)14.

Table (1):
Primers used in this paper.

Once the PCR reactions were completed, separated on a 0.8% agarose gel at 100V for 25 min and then the DNA samples were visualised on a UV transilluminator.

Antibiotic Susceptibility Test
The antibiotic susceptibility test for P. aeruginosa was done using disc diffusion on Mueller-Hinton agar (CM0337-OXOID), following15. Briefly, the standard of P. aeruginosa in oculum of 1.5*108 cell was cultured on Mueller Hintonagar. Subsequently, the antibiotics discs were placed on contaminated plates. Finally,the plates were incubated at 37°C for 24-48 h, then the diameter of the inhibition zone was measured by mm15.

In the study, clinical and resistant isolates of P. aeruginosa were isolated from cystic fibrosis (CF)and screened for different virulence genes that are important in causing P. aeruginosa pathogenesis. One hundred clinical sputum were collected, followed by culturing onto CHROMagar™ media to isolated P. aeruginosa strains. Eventually, twenty strains were isolated and confirmed by using VITEK- 2 Compact6system. Interestingly, the PCR screen was shown the detection of both algD and plcH genes at prevalence rate 55% of P. aeruginosa strains isolated from cystic fibrosis (CF)  Fig. (1). 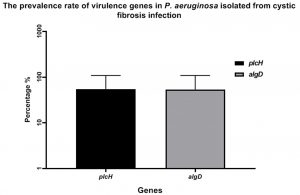 Fig. 1. The prevalence rate of virulence gene of P. aeruginosa isolates from cystic fibrosis (CF). The gene algD and plcH were detected in P. aeruginosa strains at a rate of 55%.

The antibiotics sensitivity for the P. aeruginosa isolates against different antibiotics was shown the highest resistance percentage for tetracycline, chloramphenicol, erythromycin, streptomycin, azithromycin, trimethoprim, while the lowest resistance against the imipenem at 20% at the p-value of 0.0212 (Fig. 2). Fig. 2. The percentage of antibiotic resistance of P. aeruginosa strains isolated from cystic fibrosis (CF) in al Muthanna hospitals shows the highest percentage of the resistance for all antibiotics were tested, while the strains were shown the lowest resistance level against imipenem. The p-value of antibiotics resistance is 0.0212 that measured using ANOVA, GraphPad Prism software. **: the population means are significantly different at the p-value= 0.05 level. Pseudomonas aeruginosa is a common complication for many infections such as cystic fibrosis (CF) and wound, associated with resistance for multi-drug antibiotics resistance, leading to the increase of the rate of both morbidity and mortality16,19.

Pseudomonas aeruginosa is Gram-negative bacteria have been recently treated with AgNPs showing a strong effect on gene expression by up-regulated 27 genes and 32 down-regulated genes17. The actual mechanism of AgNPs is the interference with the function of the bacterial cell membrane leading to generate reactive oxygen species (ROS). Moreover, the AgNPs have a similar role to silver ions in the regulation of the membrane transporter proteins. These mechanisms lead to an effect on bacterial growth and inhibition of multi drugs resistance bacteria17. Likewise, the silver nanoparticles have been tested against different bacteria such as E. coli, S. aureus methicillin-resistant, K. pneumonia and P. aeruginosa showing a promising activity but the activity against P. aeruginosa was the highest at a rate of 90% compared with others bacteria21.

The PCR screen results showed the detection for both algD and plcH genes and this is agreed with others studied for Pseudomonas aeruginosa strains isolated from the lungs with cystic fibrosis disease24. The transcription of algD gene, which encodes to GDP-mannose dehydrogenase, causing for production of exopolysaccharide alginate that is important in the infection of Pseudomonas aeruginosa in the lung18. However, the plcH gene expression is responsible for biofilm formation due to making lipid in the bacterial cell membrane and the mutant of this gene have been shown a defective in colonizing in the lung of a model animal with no biofilm formation20.

In conclusion, this study has demonstrated that the Ag/F Tio2 nanoparticles can affect the expression of the most important virulence genes (algD and plcH) in P. aeruginosa during the lung infection. Our results suggest that the silver nanoparticles can be used as alternative antibacterial therapy against cystic fibrosis disease.

ACKNOWLEDGMENTS
We would like to express our heartfelt thanks to Professor Ayad Alkaim for providing nanoparticles particles to study the effect on gene expression.

CONFLICT OF INTEREST
The authors declare that there is no conflicts of interest.