The study was taken up to identify the various bacterial agents causing intertrigo of feet and to determine the antimicrobial sensitivity pattern of the isolated bacterial agents. A total of 75 pus samples were collected from infected toe, web space infection by using sterile swabs.Samples were inoculated into Blood agar and MacConkey agar for the bacterial isolation and antibiotic susceptibility testing was performed as per CLSI Guidelines. Out of 75 samples examined 38 were from male patients and 37 were collected from female patients. 101 different types of bacteria were grown in the present study. Among them38 Gram-PositiveCocci (GPC) and 63 Gram-Negative Bacilli (GNB). Of 38 Gram positive cocci isolated, Staphylococcus aureuswere19 (18.81%), followed by Coagulase negative staphylococcus (CONS) 12 (11.88%) and Streptococcus spp7 (6.93%). Of 63 Gram negative bacilli isolated Pseudomonas were19 (18.81%), followed by Proteus 16 (15.84%) and Klebsiella13 (12.87%). 25.8% Staphylococcus sppare Methecillin Resistant (MR) strains. Among the Gram negative bacteria 9.25% of the strains were showing resistance to Colistin or Tigecycline. It is known fact that different microbes and factors play very important role in lesions of toe web space. In the present study 25.8% of Staphylococcus species and 9.25% of Gram negative bacteria were multi drug resistant.Therefore, clinical and microbiologic studies are needed to help in the selection  of appropriate treatment, prevention of important complications and emergence of drug resistance pathogens.

Intertrigo is the clinical condition resulting from cutaneous inflammatory process due to opposing skin surfaces., Axillae, inframammary folds and groin are the most common sites affected. It can also affect other areas like neck creases, interdigital areas, anticubital fossae, umbilical, perineal, and folds of the eyelids1. Diabetes patients in particular are more susceptible. Environmental factors play an important role which includes the hot and humid weather.

Foot intertrigo is the inflammation of toe web spaces. It often occurs in the 4th interdigital space extending to the dorsal and plantar aspects, which is characterized primarily by mild erythema2. Patients with intertrigo can suffer from this disorder throughout life. It may present as a chronic erythematous exfoliative lesions. This condition often misdiagnosed as tinea pedis or eczematous dermatitis. However, macerated eruption in some patients, do not respond to treatment with anti-inflammatory agents3.

Intertrigo is a fertile breeding site for various microbes due to damaged skin and moisture associated with it resulting in  secondary cutaneous infections . Bacterial multiplication may be associated with keratinocytic necrosis. Staphylococcus aureus alone or in combination with Group A β-haemolytic streptococcus can be the cause for this condition. Gram negative bacilli like Pseudomonas aeruginosa, Proteus mirabilis and Proteus vulgaris may also cause alone or simultaneously. In the begin it may starts as a bacterial infection, which can further damage the stratum corneum and facilitate the proliferation of other drug resistant microbes.  Gram negative bacteria like  P. aeruginosa combined with other gram- negative bacteria such as Moraxella, Alcaligenes, Acinetobacter, and Erwinia are often reported as agents associated with toe web intertrigo 4.

Damaged stratum corneum produces natural substances with antibiotic properties that change the composition of commensal bacterial flora, encouraging the proliferation of drug resistant bacteria5. Hence the study was undertaken to know the bacterial etiological agents of intertrigo of feet which helps in selection of appropriate treatment.

All the samples were collected from the patients with Intertrigo of foot attending the out-patient/In patient Department at tertiary care hospital in Mysore, South India. 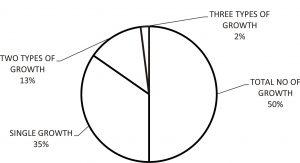 Among the isolates of Acinetobacter baumanii all the isolates were 100% sensitive to Colistin, Tigecycline and 100% resistance was seen to Ampicillin.

Among the isolates of Pseudomonas spp all the isolates were 100%sensitive to Colistin, Piperacillintazobactam, Ceftriaxone, Ceftazidime, Imipenem and Ciprofloxacin.

Among the Gram negative bacteria 9.25% of the strains were showing resistance to Colistin or Tigecycline.

Obese patients with diabetes are more venerable for foot intertrigo in  high heat and humid conditions , but it can occur in anyone. Urinary and fecal incontinence, hyperhidrosis, poor hygiene, and malnutrition are other conditions associated with foot intertrigo. Toe inter webintertrigo may be associated with closed-toe or tight-fitting shoes and commonly affects persons participating in athletic, occupational, or recreational activities. Flexed posture, short necks, drooling and relative chubbiness seen in infants make them more susceptible for intertrigo 6,7. Individuals with prominent skinfolds on either side of the chin are also venerable  for intertrigo8.

Table (1):
Showing the antibiotics used in the study.

Foot intertrigo may present as a chronic erythematous exfoliative lesions. This condition often misdiagnosed as tinea pedis or eczematous dermatitis. In some patients, the macerated eruption is unresponsive to treatment with antibacterial agents, antifungals or anti-inflammatory agents9. Therefore, clinical and microbiological studies are suggested to assist in the selection of appropriate treatment and prevention of important complications10.

The predominant organism isolated was Staphylococcus spp (Staph. aureus and CONS) which accounted for 37.62%.; this is in accordance by the study conducted by Lin et al.,13 and Aste et al.,14 who isolated in 55% and 46.4% cases respectively.

Second most predominant organism isolated was Pseudomonas spp 18.81%. This correlates with the studies of Ahmad et al11. who isolated in 10%  of cases. All the isolates were 100% sensitive to Colistin, Piperacillin-tazobactam, Ceftriaxone, Ceftazidime, Imipenem and Ciprofloxacin. In Krishna et al15 study 29 (93.55%) Pseudomonas spp were sensitive to piperacilin-tazobactam followed by 27 (87.09%) to amikacin, and 21 (67.74%) to ciprofloxacin. These variations could be due to variations in the study populations.

It is well known fact that different microbes and factors play very important role in lesions of toe web space. Although fungal foot infection is common, patients who do not respond to topical and/or systemic antifungal therapy should be re examined for another primary or secondary dermatologic condition that may resemble pedal fungal intertrigo. In the present study 23.1% of Klebsiella , 18.8% of Proteus species were resistant to Colistin and 2 strains E.coli and  Klebsiella were Resistance to Tigecycline. These findings suggest that intertrigo is caused by drug resistant pathogens which may not respond to regular antimicrobial agents. Therefore, clinical and microbiologic studies are needed to help in the selection of appropriate treatment, prevention of important complications and emergence of drug resistance pathogens.